Happy Record Store Day! Actually, it’s tomorrow (April 18), but I’m giving you a heads up so that you can hustle your way down to one of your favorite record stores to pick up some special discounts and in-store performances. You can thank me later. 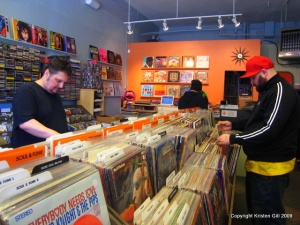 As someone who spent the better part of her high school and college days working in a record store, I have a personal bias for urging you to celebrate Record Store Day. Not that I made ANY money at this job. I spent 90% of my earnings on records, high-quality tapes on which to record these records, band posters to cover my dorm walls, concert tickets, and CDs (even though I did not yet even own a CD player). Basically, I was broke, but happy.

In these poor economic times, things like candy and lipstick go up in sales. Why? Because they are simple, inexpensive ways to help make ourselves feel better. Why not give yourself the gift of music? Sometimes shopping for music is just as much fun as listening to it!  Plus, you can walk out of any music store and get yourself a dose of happiness for under a tenner.

Perhaps you need the new Doves or Silversun Pickups album? Or how about grabbing an oldie but goodie? I recently found The Jam’s The “The Gift” (for $5.00 – what a steal!) at Jive Time Records in Fremont the other day. Did you know that Paul Weller just played here in Seattle on Wed night? I missed his show, but I might just go back to pick up that record! 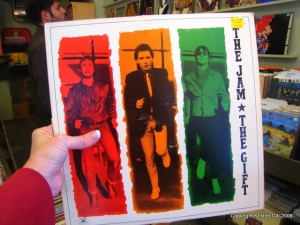 Or, how about this gem that I found: The Cult’s “Sonic Temple”. I remember seeing The Cult when I was underage at The Metro in Chicago…on a school night, no less! I think my mom thought I was studying with friends. Little did I know then just how formative music would be to my life. And, what better place to indulge that passion than at the record store? That’s where all the kool kids are, anyways!

If you’re in Seattle, check out:

Who needs match.com when you can go to an actual  store and meet persons of the opposite sex who have similar musical tastes sifting through the CD bin right next to you? Why not get your eye candy and ear candy at the same place? Try that one on for size, iTunes!

Now step away from the computer and bust a move down to your closest record store and buy yourself something. You deserve it!

Go broke and get happy.

For some crazy stories of my days of working at a record store in Chicago, see my post from last year’s “It’s Record Store Day!” 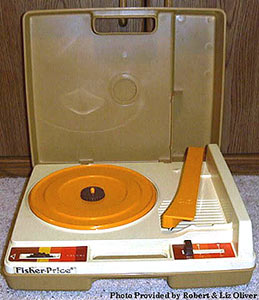 I swear we had this Fisher Price player growing up!

p.s. Don’t forget to check out other great photos on DeliciousBaby’s Photo Friday!