Gill seems to have trouble in the back field as Switzerland packs another punch, going up 2-nil to a stunned Gill, who thought she was well-equiped for this battle. It appears that Gill forgot a watch, and this has proved a deficit for the away team.

Whoa! In a surprising move, Gill maneuvers around a well-ordered defense and pops in an easy goal, pointing at the clock for dramatic effect.

And again! GOAAAAAAAL! Despite Switzerland’s heavy downpour of rain in the south (where there is supposedly 300+ sunny days/year) followed by an early–season blizzard that stranded Gill at a train station in the middle of nowhere for over 3 hours, Gill still manages to reach the Matterhorn and score. Her fans go wild!

Despite a last-ditch effort by Switzerland in the final minutes to thwart Gill in a long queue at the airport, a dash to her connecting flight (with no time for shopping at duty-free), and leaving her with copious amounts of Swiss Francs that cannot be used anywhere else, the final score holds steady in a 2-2 draw.

Interviewed after the game, Captain Gill said “Switzerland gave a strong effort throughout, but we held strong and would not be deterred, despite their best efforts. This 2-2 draw feels more like a victory.”

In other words, folks, this game ended up, well, neutral. How Swiss! See you at next year’s Adventure Travel World Cup Qualifiers, where Gill takes on a highly-touted Namibia! 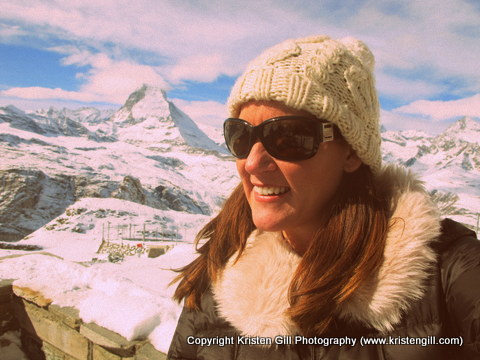